A New Adventure - all aboard at Tall Ship!

Trading in the laser pointer, lecture hall and boardroom presentations for a life on the high seas - again.

We're trading in the morning commute, the monthly board room priority meetings, the hours preparing lectures about marine ecology, genetics or community studies for a life filled with endless horizons far out to sea. The daily commute starts with a morning swim and a snorkel to identify the local reef fish, and maybe I'll have my spear along for some spearfishing, or with gale force winds during long crossings, or perhaps finding "parking" in mirror calm anchorages. And beaches, perfect white sand beaches offering a gateway from the warm tropical water into the terrestrial life of jungles, rainforest, wildlife and the cultures of distant shores. Life on the high seas again - for the foreseeable future. 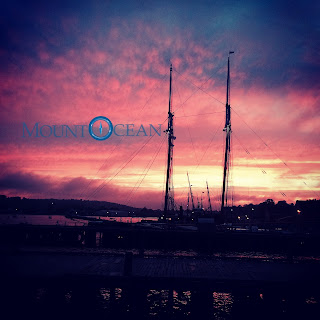 Tall Ship Ocean Adventure
We're excited to launch a new journey and to share every mile under the keel, every challenge and every experiential rollercoaster with you. This time there will be all new ways to interact with us and some great new footage to be shared! Let the "to do" lists begin: 1) pack up life (especially the ice-climbing, snowboarding and cold water surfing gear), 2) sell most things, cars, trucks, couches. Donate majority of cold weather clothes. And go.

Please join in on an all new adventure - this time aboard a Tall Ship Schooner.
www.mountocean.com
Posted by Excido at 3:36 PM No comments:


Since I returned to terra firma in 2011, I've been lucky to be occupied with some new adventures. I've developed a new blog to document and to share my latest exploits on land and on the ocean. I invite you to check out mountocean.com. You'll notice a number of posts from IO's Pacific Voyage mixed in with a lot of recent entries, including posts about my experience sailing a 151' Brigantine tall ship to the North Pacific Gyre to research ocean pollution, my first solo attempt at skydiving, and my coast-to-coast expedition across Cape Breton Island on skis.

For my fellow die-hard sailors looking for sailing resources and stories of adventure on the high seas, you're in the right place. Steam ahead.
Posted by Excido at 5:48 PM No comments:

From Brisbane to Bamfield in 5 days 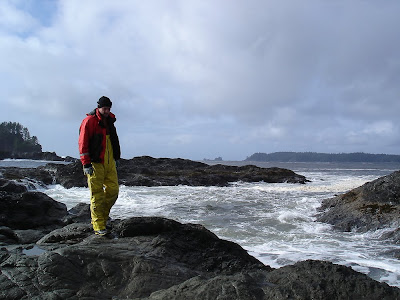 Like they say, nothing goes to windward like a jet airplane! Sidney to Calgary in 13 hours, incredible! I don’t think anyone living in modern society appreciates what an airplane can do until you have taken 10 months to sail what a plane can do in 13 hours. Of course on the boat your body has allot more time to acclimate to the weather en-route. 19 hours after leaving sunny, warm 25oC Brisbane, the weather in snowy Calgary was -21oC. OUCH! I was there for 2.5 days and the weather dropped to -41 with wind-chill. There was a reason we moved out of that place and headed for the tropics! I thought I was going to be prepared by bringing my big red float coat for a warmth, but at those temps the foam inside the jacket froze solid and became like steel plates, certainly not retaining any warmth.

Now I am above 48o North back out on the West coast teaching at the Bamfield Marine Station, taking students out onto the cold grey waters of the North Pacific. While it is still beautiful and interesting to have the contrast, those warm aquamarine lagoons we had begun to take for granted sure seem far away.

We sailed across the Pacific Ocean.

We have sailed IO from the Northern BC coast, down North America, across to the South Pacific and all the way to Australia.

I counted how many miles we have come. I counted how many days we traveled pushing our tiny vessel to the opposite side of our planet. I have written about how many perfect anchorages we found, how many countries we visited. I have photographed how many fish we caught, how many markets we shopped at, how many perfect white sand beaches we walked. I have remembered how many days we feared for our lives, how many waves tried to break IO and terrified our minds. I have experienced what it means to fulfill a dream, to think it into being, to plan, to build, to begin, to endure and enjoy and finally, now, to end.

But friends, fret not. We will continue to post our Australian adventures over the next few months and know that I believe that a person is only as good as their next great adventure. So stay tuned, as the next great journey has already formed in my mind. I am planning on leaving the Ocean far behind and returning to my Cowboy roots. I hope you will come with us along for the ride as we Reinfree. 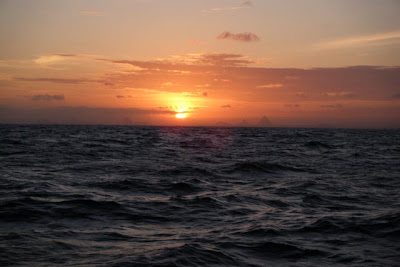 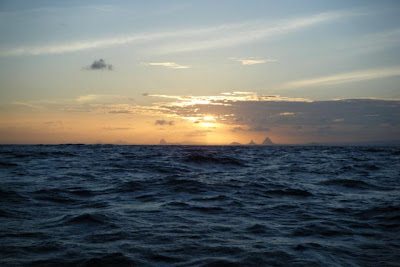 We approached the Australian coast just as the sun was setting over the Glass House Mountains North of Brisbane.

The last of the spearfishing in New Caladoinia 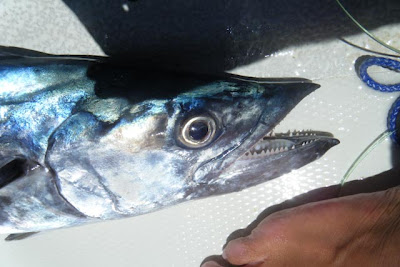 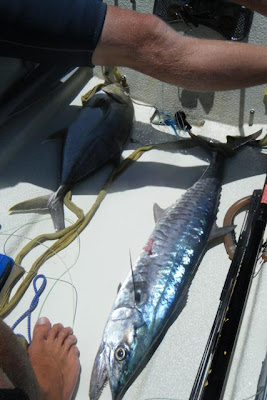 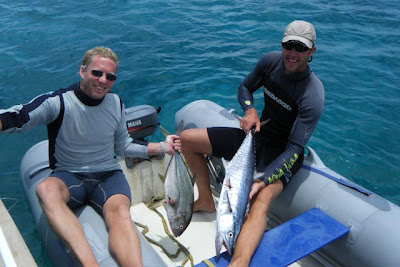 Af few last shots of spearfishing Trevally and Walu.
Posted by Excido at 8:03 AM No comments:

November 15, 2010 The Approach
My head told me making landfall in the evening was not ideal and so all my senses became more alert. But my heart simply melted at the sight of a beautiful sunset decorating the landscape of Australia. Those peaks are Australia! This is my first time on this continent! The city lights appeared and drowned out the entrance marker lights. Numerous giant freighters started to light up. We decided to follow one ship into the NW channel, and for hours, dodged them one by one coming and going. Even inside the channel, we were still exposed to the wind and waves and got tossed around. I sucked on a piece of dark chocolate to numb the intimidation. Marker after marker, we concentrated on flashing green, flashing red, and strong currents that almost got us crashing into a cardinal marker. During the 360 scan every two minutes, I caught a glimpse of the moonlight on the water. It was only one of the many stimulations and things to process in my brain. Wow, what a contrast to the previous night when it was the main focus. Then it hit me, my goodness, that was it. That was the end of our trip.
Arriving in Australia had another kind of exhilaration to it, just as significant as arriving in the Marquesas. We went up the Brisbane river at dawn and realized, we did it. We made it across the Pacific Ocean. We made it to Australia. Of course, now that it's done, I think it would have felt unfinished to leave the boat in New Caledonia. That could have easily happened. Oh, how thankful I was to arrive!

I think it will require some time for all this to sink in. I had complained, cursed, cried, sobbed, and shouted out of frustration on some passages. The sucky part about cruising seem to never make it into spoken or written tales about sailing. It is a double-edged sword, a cruel mistress, a love-hate relationship. Yet all of that seems to quickly fade away as each hour goes by, almost as quickly as the saltwater on deck got rinsed away. It's strange how things work that way. Now, I am going look for a Magnum bar. Arh, sweet as!

We started this passage on new moon. Nights were spooky dark. The seas had calmed down and so have my nerves. Usually, the night sky would be stunning and I could observe the stars to my heart's content. However, it was overcast for night after night and we were getting water sprayed from the beam incessantly that I stopped looking up at the sky. Then last night, the slit crescent moon shined its light on the jet black water, like an old friend saying hello, and laid before me my favorite scene in the whole world. Just like staring at a campfire, watching the moonlight is mesmerizing. It comforts me very much at night. She briefly said her hello, then hid behind the clouds.

On passages, Mike and I have passed time daydreaming and talking about many things. If it's not about a big bowl of ice cream or endless long hot showers, it's about the kind of land activities that sound enticing. What lies ahead? What are our next goals? What do we need to do to get there? Although I'm looking forward to many of the conveniences offered back home, I cannot help but think at some of the significant things our friends have said upon their return home. The common theme of the culture shock is contained in this quote:

"It's shocking how fast we were pulled back into the crazy rat race, despite our determination to keep a good balance."

This sentiment also seems to be there whether they were cruising or not. Our friend who spent a year traveling and climbing shared with us how crazy it was to return to the consumerism frenzy and how she missed the simple lifestyle she had lived. Is it all a fleeting dream? There are many thoughts on my mind, but for now, it is to soak in the moon and the stars.

Posted by Excido at 5:19 PM No comments:

Aboard IO in Vanuatu