A Day with the Cephalopods 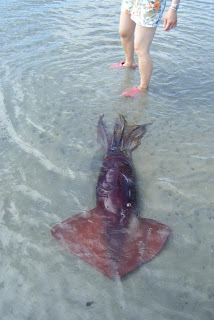 We hiked over to the sand flats and the nearby mangrove estuary and were witnesses to some amazing biological sights. We saw stingrays and blue sand crabs in the tidal mangrove estuary. Then we found that some huge Humboldt squid that had washed ashore or were trapped on the shallow sand flats. Hyo-jung also spotted what I think might be a blue-ringed octopus (though I'm lacking a proper invertebrate key of this region). 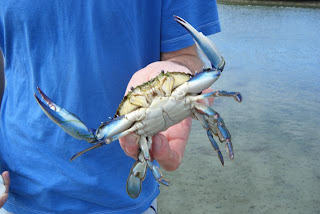 The Humbolt squid (Dosidicus gigas) or known locally as Diablo rojo (the red devil) is a very large super predator of the semitropical waters typically ranging from California to South America, but has been seen (by us earlier this year, and others) as far North as the BC coast during warm El-Nino years. Typically only found in deeper waters, these animals have been demonstrated to be particularly aggressive during feeding frenzies and when they occasionally coincide with recreational or commercial divers have resulted in several 'attacks'. Like all cephalopods, these squid have sucking discs on the ventral surface of their (in the case of squids, 10, not 8) tentacles that are used for prey capture and manipulation. However, unlike related species, and in tune with their aggressive nature, these animals have a serious lunate sclerotised structure covered in sharp teeth along the inner surface of each sucker. These are especially well developed on the two longer feeding tentacles. As you can see from the pictures, (will post asap) these structures are not trivial. And the fact that these beasties were about the same size as Hyo's torso, eeesh! I would not want to mess with one, never mind when they are typically found in schools of up to 1200.

The (blue-ringed?) octopus, while not aggressive and stunningly beautiful, is currently recognized as one of the worlds most venomous animals. This pan-tropical animal ranges from here to Australia and is one of the few dangerous venomous creatures that we may encounter while pursuing (hopefully) numerous tide-pooling activities. Of the genus Hapalochlaena, this beastie feeds on small invertebrates and utilizes a venom called tetrodotoxin that is a sodium channel blocker, that causes general muscle paralysis and, in humans, can lead to respiratory failure and suffocation. That's not good! Of course, they are not aggressive and would only attack for defensive purposes, but one wrong step and this adventure is over! 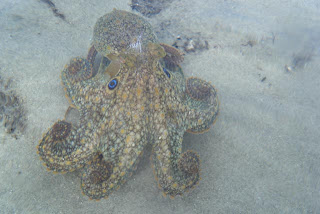 Fantastic.
Note: please believe that with the preceding information that I am in no way attempting to promote any biological sensationalism regarding so called "dangerous animals". With respect to the Squid, these beasties are particularly nasty and due to their increased geographical range which, has also been associated with the affects of global warming, have been speculated to have major current and future impacts on fish crops and other aspects of marine ecosystem stability in their expending range. I was just particularly stoked to be up close and personal in a relatively safe (for me!) environment with a creature that I have read lots about and to admire their size and efficient, if not lethal, feeding adaptations. 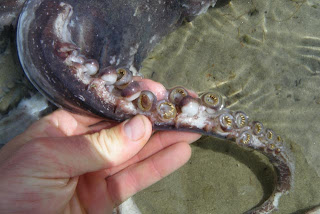 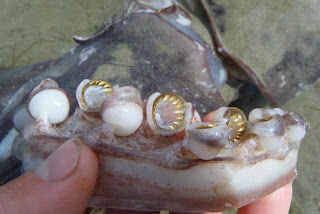 he day concluded by me catching 3 Mexican Barracuda (Sphyraena lucasana) while spin casting off the back deck. We did not keep any because we still had some yellowtail left, which, incidentally we have prepared in three different ways now, with the third being as sashimi (aged 1 day and chilled to perfection in our fridge). Turns out, having it as sashimi really brought out the subtle flavor of this fish and was just fantastic.