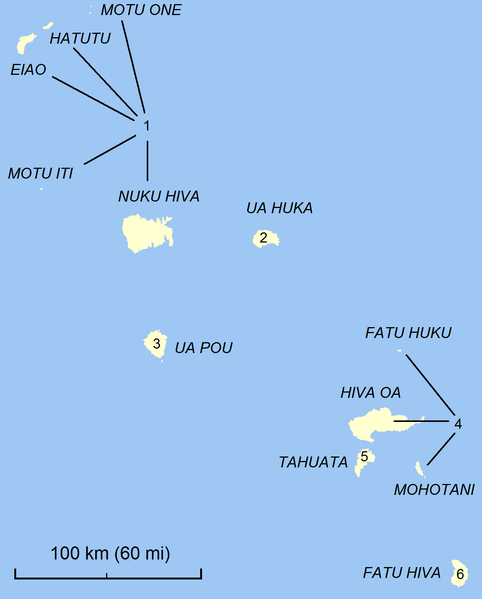 The Marquesas Islands group is one of the most remote in the world, lying about 1,371 km (852 miles) northeast of Tahiti and about 4800 km (3000 miles) away from the west coast of Mexico.  The Marquesas are among the largest island groups of French Polynesia, Nuku Hiva being the second largest island in the entire territory, after Tahiti.  The Marquesas are remarkably dry islands and has a population around 8,632.
The first recorded settlers of the Marquesas were Polynesians, likely arriving from the region of Tonga and Samoa.
The islands were originally named "Te Henua Enata" (Land of Men) by the native Polynesian people.  First discovered by the Spanish in 1595, they were later made famous by Captain James Cook.  The Marquesas includes 12 islands (2 are small rock islands), and of that total, only 6 are inhabited.  These islands were in-the-news when Nuku Hiva served as the site of the popular TV show, Survivor.

For additional info about French Polynesia, and their most interesting history, go here.
Here are a few pictures of the area.