Feeding sharks off the back of the boat! 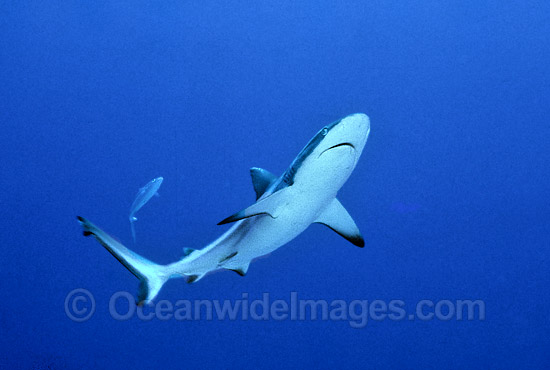 Today I SCUBA dove the south pass entrance of Fakarava and stopped counting Gray Reef sharks when the count exceeded 200! The dive began by dropping down 30 meters to the reef shelf where it then drops off to 1000 meters. I swam over to the edge and looked over into the abyss. The only thing to be seen was a myriad of Gray Reef sharks swimming in the distance. We then let the current bring us into the channel only to confront the main school of Gray Reefs and White Tip Sharks and uncountable tropical fish.
Immediately upon exiting the water I met up with my latest spear-fishing pal (Jaime off s/v Totem) and buzzed out to a lagoon reef and speared two bumphead parrot fish and a banded grouper. The system is that one person dives down to take a shot and the other looks out for sharks. We did see two Gray Reef sharks but they kept their distance and we were cautious to not kill a fish when sharks are near.
Upon returning to IO, I filleted the parrot and hung the carcass on a string over the side. Darkness had fallen by then and the Black Tip sharks that circle the boat day and night were on the hunt. The carcass hit the water and the line began to pull through my fingers harder than I could hang on. Hyo grabbed my shorts to brace me and Al was trying to take a video clip. The shark grabbed the carcass and pulled with more force than I expected. Awesome! I can't wait until tomorrow.
m

Kevin and Tash are enjoying the South Pacific lifestyle of hourly swims, sleeping on deck under the stars and the incredible underwater world. The amount of marine life is astounding! Lots of pictures have been taken and memories have been made.
French is being spoken on a semi-regular basis, which is good because some of us could use some culture.
Kevin and Tash's Top Five Boat Observations
1. How can a bathroom that is so small be called a bathroom? (How does Hyo take a shower in there?)
2. Am I looking for a snack in the kitchen or playing Tetris?
3. We recommend bringing a CSA approved helmut on board because you will bump your head at least 10 times an hour!
4. Why did a company design a manual anchor winch that pulls the blasted thing up 3 inches at a time?
5. A label maker to mark all of the blink'in boat parts, we don't know a halyard from a bilge pump.
6. (yes, I know I said 5) Is that dingy really supposed to be a lifeboat? I've worn clogs that were bigger?
Still on the to-do list: drive scooters, eat more baguettes with Nutella, pineapples, and Tash wants to be the "shark whisperer".
Kevin
Posted by Excido at 12:05 AM