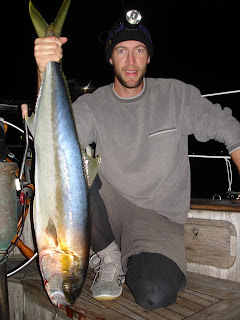 Five days at sea: 99 hours, 39 minutes, 461 nautical miles, average speed 4.6 knots, max speed 10.1 knots. The best part: All but one of those hours involved turning on the engine. It's the best sailing we've done on IO so far. There was some routine to the days instead of just suffering and waiting to get somewhere: numerous sail changes, adjusting the windvane, learning weather patterns, navigation, reading, eating, and hoping for a good catch.
Sailing seems to be all about doing nothing for hours or days and then having everything happen all at once. Racing through the relatively narrow, mountain-bordered entrance to Mag Bay, we found the wind blowing about 20 knots on our nose. I could see the numerous spouts of at least a dozen grey whales that would provide moving targets for us to avoid. We were just discussing the plan to drop the drifter and raise the yankee (the sail we use for beating to windward) when I heard a hit on the line we were towing. I could see several gulls diving and jittering behind us and knew that we were dragging something large. I started to grind in the 250 lbs test line on our big Peetz reel that was mounted to the stern railing. Within about four minutes, we had a 30 lbs yellowtail (Seriola lalandei) clubbed in the cockpit, the drifter down and stowed, and the yankee up and pulling hard in the 20 knot headwind, all in a bucking chop that was rolling out of the bay. I mean seriously, I had been dragging a line for five days, and besides the two hits that broke my 80 lbs test line and lost me two hooks three days ago, we have not had even a nibble! But I'm not really complaining. I wish you could taste this; it's far more delicate than the bonito but delicious nonetheless.We spent the last remaining hours of the day tacking back and forth into the headwind when we heard our name being called out over the radio. "IO, IO, IO, this is Ceilydh". What a treat, to be welcomed to the big warm bay by our friends Evan, Diane, and Maia. Not long after the hook was dropped we were chatting over snacks and sharing huge fillets of yellowtail.
Posted by Grand Master I at 9:47 PM